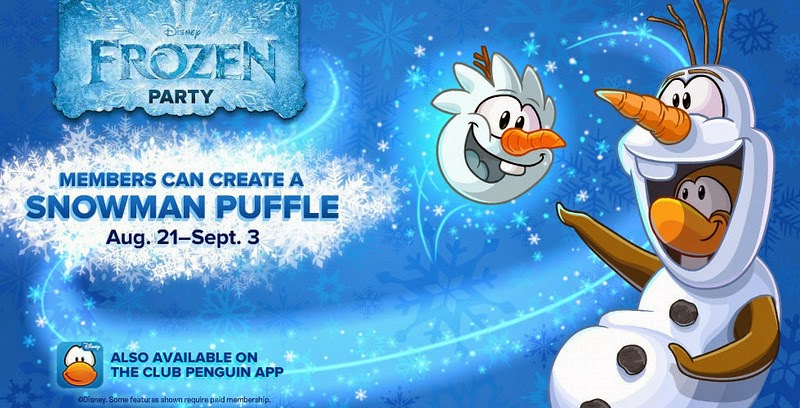 Players will start the party by searching for Elsa’s magic snowflakes that are hidden around the island. Once members complete the snowflake quest, they will earn the ability to transform into Olaf or Marshmallow and freeze objects around the island. While players are searching for the snowflakes, Elsa will be constructing her Ice Palace on Club Penguin Island for players to explore. Once the Ice Palace is complete, players will be able to hear a special performance of “Let It Go” when they visit.
During the Frozen Party, Club Penguin and “Disney’s Frozen” fans can:
·         Choose from a number of member-only costumes to dress their penguin characters in, including Olaf, Sven, Anna, Elsa and Kristoff themed outfits
·         Search for seven magic snowflakes that will give members special powers to freeze items around the island. All players can thaw frozen objects by using the heart emote
·         All players can visit Elsa’s Ice Palace igloo to hear a special instrumental performance of “Let it Go,” as well as decorate their own free Ice Palace themed igloo
·         Members will also be able to transform themselves into Marshmallow or Olaf or even create their own snowman Puffle
Posted by Unknown at 11:44 AM