My daughter has been a huge fan of Monster High since the ghouls first stepped out onto the scene back in 2010! She even chose Monster High as the theme for her 4th birthday party. When I received an invitation to attend the black carpet premiere of Monster High: Frights, Camera, Action in Los Angeles, I just knew that Mya was going to pull out her fangtastic attire and get all ghouled up for this event. When we arrived in Howlywood, she was the first one to make her way down the black carpet and of course she brought her friend Howleen with her, after all, you can't attend a Monster High event without one of your ghouls by your side. Even my boys were in on all the fun. They threw on their frightish zombie tuxedo tees and slimy caps. My youngest made sure to bring Deuce as his plus 1! We met up with fellow LA Blogger and friend Tee Burgess of Thatsitmommy.com and her sweet little girl who my kids adore. The girls had a blast on the black carpet playing with all the Monster High dolls. We were so excited to see all the Monster High voice actors, hang out with some really cool ghouls, partake in the festive treats and take tons of pictures. After about an hour of partying, we were ushered into a creepy theater room to watch a private screening of Monster High: Frights, Camera, Action. It was a howl!!! We all loved it and the girls were cheering at the end. 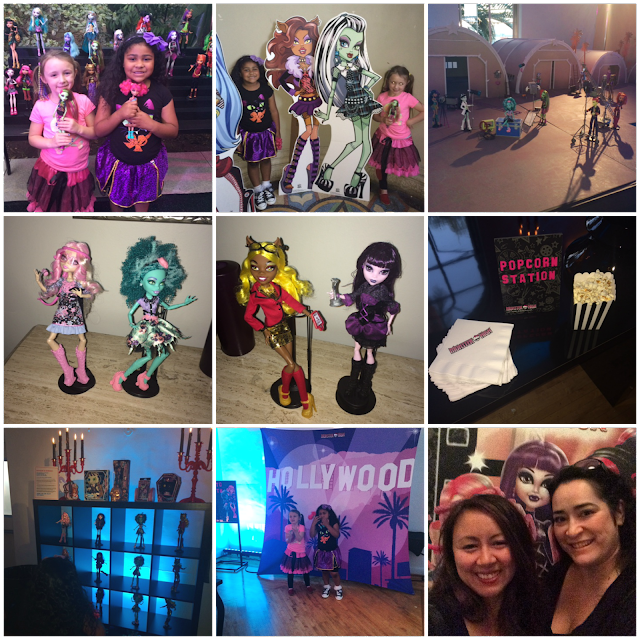 Make sure to grab your copy of Monster High: Frights, Camera, Action on DVD today! Don't forget to pick up the newest ghouls to join the Monster High crew. Keep your eyes out for Honey Swamp, Viperine Gorgon, Clawdia Wolf and Elissabat! M-O-N-S-T-E-R...Monsters, Monsters, so Bizarre!

Disclosure: I was not compensated for this post. I was invited to a Media Premiere of the DVD in order to facilitate my review. These are just my two cents!
Posted by Unknown at 10:53 AM