Family Productions at the Wallis Annenberg Center Featuring Jason and the Argonauts!

White from Catherine Wheels Theatre Company   February 28 - March 23
The Trumpet of the Swan   May 2 - 4
From the E.B. White novel adapted by Marsha Norman with music by Jason Robert Brown


Produced in conjunction with Robert Thompson and the National Baseball Hall of Fame
Family offerings at the Wallis Annenberg Center for the Performing Arts in the 2014 season are highlighted by the novel symphony The Trumpet of the Swan, May 2 to 4, 2014, adapted by Pulitzer Prize winner Marsha Norman from the E.B. White novel, with music by Tony Award winning composer Jason Robert Brown.   Baseball Swings: A Musical Event, produced in conjunction with the Baseball Hall of Fame, will run from April 3 to 6, 2014.  Baseball Swings celebrates the unique love affair between baseball and music with a “major league” concert featuring the greatest music about the greatest sport, with 2,000 images and video synchronized to the live performance.  Both will be performed in the Bram Goldsmith Theatre.
Children’s programming with longer engagements in the intimate 150-seat Lovelace Studio Theater will be a focal point for The Wallis.  The award-winning Catherine Wheels Theatre Company from Scotland presents White, February 28 to March 23. The production won three 2010 Edinburgh Fringe Festival Awards (including Total Theatre) and the 2011 Scotland Critics Award for Best Production for Children, Design, and Technical Presentation.  A two-actor import from the Visible Fictions children’s theater of Scotland, Jason and the Argonauts, based on the classic Greek myth performs January 14 to February 2, 2014.


Executive Director Lou Moore said, “Children's programming is a major part of who we are.  This year, we are bringing two acclaimed theatre companies – Visible Fictions and Catherine Wheels Theatre Company from Scotland, a country known worldwide for its high quality professional theater for young people.  Then we will be producing two very different musical events.  E.B. White’s novel The Trumpet of the Swan has been transformed into a chamber symphony by Marsha Norman librettist for the Broadway musicals The Secret Garden and The Color Purple, and Tony-winning composer Jason Robert Brown, who wrote the scores of The Last Five Years and Parade.  Norman and Brown are currently preparing their musical version of The Bridges of Madison County for Broadway.  The other is a wholly original performance called Baseball Swings – where America’s greatest pastime will be celebrated for the entire family.”


Family Subscription tickets for performances for the Wallis Annenberg Center for the Performing Arts, are available by visiting www.thewallis.org, in person at the Box Office at 9390 N. Santa Monica Blvd, Beverly Hills, CA 90210 and by phone at 310-746-4000 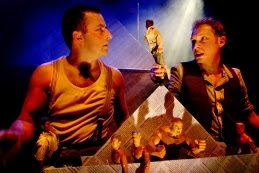 Jason and the Argonauts


Thursday and Fridays at 7pm; Saturdays at 3pm and 7pm; Sundays at 2pm and 5pm


Using two actors, a handful of action figures and one incredible wooden cart, Visible Fictions from Scotland innovatively recreates this classic Greek myth.  Jason’s uncle isn’t exactly lovable…he’s murdered his brother (the king) and stolen the crown and now no one dares stand up to him.  After being banished as a baby, our wannabe hero returns to claim his rightful throne and make some big changes.  Things are about to get a major shake-up though because Jason is BACK!  The New York Times said, “Sly, silly, sophisticated and altogether winning take on an ancient Greek myth.” For ages: 8 years old and above.
Posted by Unknown at 11:47 AM