The Smurfs2 Bring Holiday Cheer to Our Troops!


THE SMURFS 2 Bring
HOLIDAY CHEER TO THE TROOPS
Armed with Christmas Trees & Gifts Galore,
Iconic Characters Give Military Bases a Bountiful Christmas
Celebrating our U.S. troops, Sony Pictures Animation (SPA) and Sony Pictures Home Entertainment (SPHE) announced today that the company is donating Christmas trees, ornaments and hosting events at select bases to help members of the military and their families kick off the holiday season. The events will feature, in addition to the gift giving, exclusive screenings of THE SMURFS 2 and appearances by two of the world’s favorite three-apple-high creatures.


The first event was held this past Friday (December 6) at the Carey Theater on the Joint Base Lewis-McChord in the Seattle/Tacoma area. Smurfette and Clumsy, “stars” of the film, were on hand to donate 100 trees, ornaments, and THE SMURFS 2 Blu-rays™ to lucky families with winning raffle tickets, after which they shared more Christmas joy by posing for pictures.
The venue was filled and the lovable characters’ latest animated adventure generated enthusiastic response from parents and kids alike. “It's really cool when the Smurfs 'walk the walk" in supporting the troops and their families," said Patrick McGhee, the base’s General Manager. 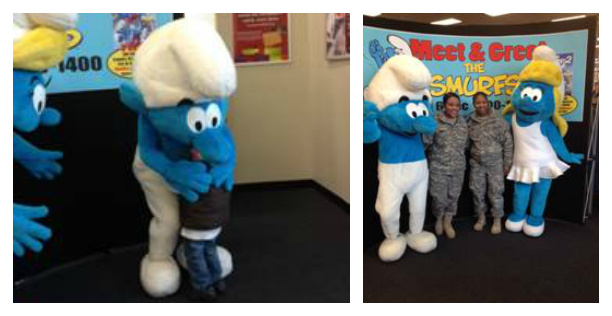 This coming Saturday (Dec. 14), the Smurfs will be at it again! This time deep in the heart of Texas at Fort Hood in the Palmer Theatre, after which Smurfette and Clumsy will greet the Christmas tree and other winners at the base’s very own Christmas tree lot.

Thank You to the Smurfs for sharing the spirit of Christmas with our amazing troops!
Posted by Unknown at 9:25 AM