MARTHA STEWART WILL BE THE HALLOWEEN EXPERT JUDGE
ON THE FIRST-EVER NATIONWIDE HALLOWEEN COSTUME COMPETITION
ON THE “HUB NETWORK’S FIRST ANNUAL HALLOWEEN BASH,” OCT. 26
Submissions for the Halloween Costume Competition Begin Aug. 16
One Semi-Finalist from Each of the 50 States
Will Appear on the Hub Network’s Two-Hour Special
The Grand Prize Winner Will Get $25,000 and
A Chance at a Walk-on Role on the Daytime Emmy® Award-Winning Series
“R.L. Stine’s The Haunting Hour: The Series” 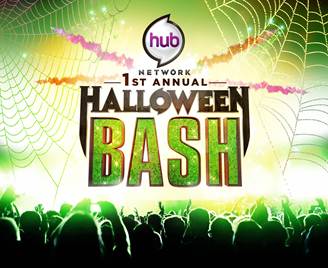 The Hub Network, a destination for kids and their families, kicks off Halloween early this year by announcing that Martha Stewart will appear as the Halloween expert as part of the panel of celebrity judges scheduled to participate in the network’s nationwide costume competition on the “Hub Network’s First Annual Halloween Bash,” to be broadcast Saturday, October 26. Anyone with a little imagination and creativity can compete for the best costume in America during the nationwide costume competition. Submissions begin Friday, August 16 and 50 semi-finalists representing each state in America will win a trip to Los Angeles to be a part of the two-hour star-studded event. One lucky winner will take home $25,000 and will have a chance at a walk-on role on the Hub Network’s Daytime Emmy® Award-winning series, “R.L. Stine’s The Haunting Hour: The Series.”
Martha Stewart, well known for her expertise in entertaining, food, crafting, and holidays, will be the Halloween expert on the panel of celebrity judges for the costume competition. Stewart’s love of Halloween arts and crafts, including extraordinary costumes – her yearly Halloween issue, which will include a feature of Martha in costume, will be on newsstands September 2nd – makes her the perfect fit for the “Hub Network’s First Annual Halloween Bash.” A celebrity host, additional judges, and musical acts will be announced shortly.
The competition is open to all ages, including individuals or a maximum of five people per group submission. Participants are encouraged to create eye-popping, hair-raising and spooky costumes within one of the following six categories:
Beginning Friday, August 16, viewers can visit hubworld.com/halloween to view a two-minute tutorial detailing complete details and entry information about the nationwide costume competition. The deadline to enter is Sunday, September 29.
Happy (early) Halloween!