With every great animated film, comes a great video game to keep the fun going! DreamWorks Turbo is getting ready to race into theaters this July and you can get a head start by grabbing your copy of this explosive new video game a day before the film releases. Turbo: Super Stunt Squad will be available on July 16th on every platform and I recently had the opportunity to see it for myself during a hands-on demo at D3 Publisher. 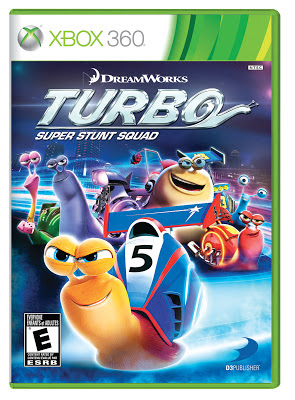 I mentioned that this title will be available on every platform, but there is an awesome twist on the Nintendo Wii and Nintendo 3DS versions of the game. The XBOX and Playstation versions offer 1-2 player gameplay where you can perform stunts and tricks, collect tokens, play against each other or work together in a co-op and so much more. The Wii and 3DS versions are completely different. On the Wii, your little snails will be able to race up to four players in a single race while performing stunts and tricks. The 3DS will allow the racer to select different tracks, collect tokens and race while offering amazing 3D graphics.
﻿