I'm sure all of my fellow gamers are looking forward to tomorrow! The Electronic Entertainment Expo, otherwise known as E3 is coming to town! All the buzz this year is surrounding the highly anticipated next-generation release of the Xbox One and PS4. We are excited to check out both platforms and even more excited to play a new game, also featured at E3, that will be available on all platforms this August. Disney Interactive will be showcasing their latest title, Disney Infinity, with all the wonder and glory that only Disney can bring.

Disney Infinity will have a HUGE presence at Disney Interactive's booth this year. They are expecting to hold down at least 80% of Disney Interactive's booth at E3. In other words, you can't miss it! We've had a glimpse of a few playsets expected to release at the end of the Summer, such as Monsters Inc, Pirates of the Caribbean and Cars. Word has it that Disney will be releasing an all new playset at this year's E3...The Lone Ranger! 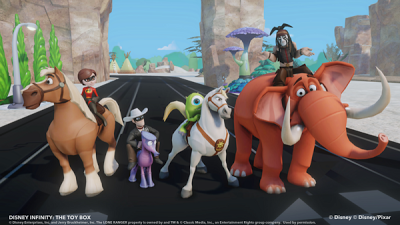 If you plan on attending E3 over the next 3 days, make sure you find your way to Disney Interactive's booth and get your hands on this game.