Cartoon Network's hit series Annoying Orange has just released it's first season on DVD and I have 3 kids that are beyond excited about this news. Orange is a sarcastic fruit that enjoys playing tricks on his fellow produce pals, cracking non-stop jokes and making everyone feel like an apple. Every now and then he shows us a softer side and reminds us how sweet an Orange can be. 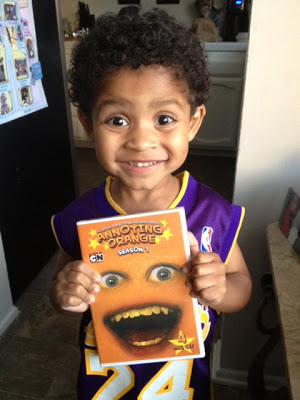 The High Fructose Adventures of AnnoyingOrange: The Complete First Season


Delivering rip-roaring laughter in honor of Cartoon Network’s season two television premiere on May 16, the obnoxiously funny series, The High Fructose Adventures of Annoying Orange: The Complete First Season, peels out on DVD May 28, 2013 from The Collective and Gaiam Vivendi Entertainment. Starring the hugely popular YouTube comedian Toby Turner and featuring an array of guest stars, including Jane Lynch (“Glee”), Leah Remini (“The King of Queens”), Bret Michaels (“Rock of Love with Bret Michaels”), Alice Cooper (Wayne’s World). With more than 1.3 billion views Annoying Orange has expanded from a viral video to Web series, to Cartoon Network primetime and has become a true pop culture phenomenon.

Approved for all ages by the Dove Foundation, The High Fructose Adventures ofAnnoying Orange: The Complete First Season is packed with exclusive behind-the-scenes featurettes, a storyboard animatic and the very first Annoying Orange webisode. The DVD set includes all 30 episodes from the debut season and will be available for the suggested retail price of $29.93.  The High Fructose Adventures of Annoying Orange Vol. 2: Get Juiced!, featuring 10 episodes from season one, will also be available on DVD for the suggested retail price of $14.93.

One of my lucky readers will receive a copy of The High Fructose Adventures of Annoying Orange Season 1! Just tell me who your child's favorite fruit is and make sure to leave your email info in the comments section below.
THIS GIVEAWAY IS NOW CLOSED!
Posted by Unknown at 7:23 PM