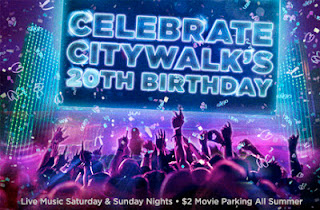 WHEN: Thursday, May 23, 2013
6:00 P.M.- Come out and check out the "Fast & Furious" cars in person!
7:00 P.M.- Fan screening of “Fast & Furious 6” at the CityWalk AMC Cinemas
WHERE: “5 Towers” on CityWalk (located in front of the Cinemas)
100 Universal City Plaza, Universal City, CA 91608
WHAT: Universal CityWalk celebrates its 20th birthday with a blockbuster-worthy bash that drives flashy street racers from Universal Pictures’ “Fast & Furious” films to park at CityWalk in time for the much-anticipated movie opening weekend and the launch of the summer blockbuster season. A life-sized wax figure of Vin Diesel from Madame Tussauds Hollywood will also share the spotlight with the “Fast & Furious” cars.

A retrospective of eight original, souped-up prop cars, including three from “Fast & Furious 6” will be staged at “5 Towers” on CityWalk to help get the birthday party started. With an exciting slate of blockbuster movies poised to reign over Hollywood this summer, Universal CityWalk will become LA’s blockbuster movie destination where guests can join the fun and see the latest hit movie for only $2 in parking or ‘Movie Buffs to Park for $2 Bucks.’

Advance screenings for the pre-Memorial Day weekend blockbuster will begin with “Fast & Furious 6” at 7:15pm, 10pm and midnight with crowds of enthusiastic fans.

The following “Fast & Furious” cars will be on display as part of CityWalk’s 20th Birthday Bash:

(Note: All but the “Fast & Furious 6” “Flip” cars will return to their original display areas at Universal Studios Hollywood beginning on Friday, May 24, where guests can view them with the purchase of a general theme park admission ticket.)
Posted by Unknown at 5:08 PM