GET READY TO SUPER-CHARGE YOURSELF WITH THE SERIES THAT STARTED A GLOBAL POP CULTURE PHENOMENON, POWER RANGERS

Following its debut in 1993, Saban’s iconic live-action pop culture series, Power Rangers quickly became the most watched children’s television program in North America. Emphasizing the importance of teamwork, responsibility and helping others by following the adventures of a group of ordinary young people who “morphed” into superheroes, this long-running series has been seen in more than 60 countries, translated into numerous languages, and remains a mainstay in children’s programming blocks. For 19 years, the highly entertaining saga and fan favorite characters from Power Rangers have captivated children and adults alike and are beloved by legions of fans worldwide.

Now you can return to where the phenomenon began and re-live these thrill-packed adventures when Shout! Factory, in collaboration with Saban Brands, unleashes a cornucopia of home entertainment offerings, many of which have never been released on DVD, from the original series Power Rangers. Through unprecedented access to Saban Brands’ vast archive of content, many of these DVD collections produced by Shout! Factory boast extensive bonus materials and collectible packaging, making them must-haves for loyal fans and collectors. 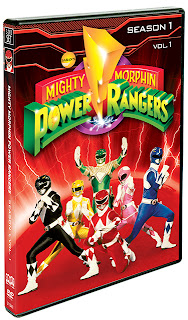 The first multi-disc set to be released will be the Mighty Morphin Power Rangers: Season One, Volume One 3-DVD set, which will arrive in stores and will be available through select digital entertainment platforms on August 21, 2012. Marking the DVD debut of the original Power Rangers series, Mighty Morphin Power Rangers: Season One, Volume One features the first 30 original episodes from the first season and delivers over 10 hours of high-energy, family friendly entertainment. Poised to attract a new audience of kids as well as young adults who grew up with this popular series, this 3-DVD set is priced to own at a suggested retail price of $19.93. Pre-order is now available at Amazon.com and ShoutFactory.com.
Mighty Morphin Power Rangers: Season One, Volume Two 3-DVD set is slated to arrive on store shelves Fall 2012. Featuring the subsequent 30 original episodes, this DVD set continues more action-packed adventures of five teens, who quickly learn the full impact and awesome responsibility of their new powers and weapons. The evil villain, Rita Repulsa and her henchmen prove to be very worthy adversaries for the young super heroes, and they are challenged at every turn.

This Ranger Mom will definitely be adding this DVD set to our family library!