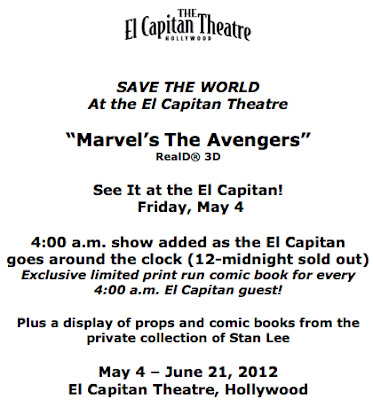 Disney announced today that Hollywood’s legendary El Capitan Theatre will present “Marvel’s The Avengers,” an action-adventure film with the Super Hero team-up of a lifetime, from May 4 through June 21, 2012, featuring special “around the clock” screenings on Thursday, May 3.
The 12:00 midnight show has already sold out, and in response to popular demand, a 4:00am show Friday morning has just been added. Guests of the 4:00 am show will receive a comic book exclusive to the El Capitan with a limited print run. The comic book tells the seminal backstory to how Earth’s Mightiest Heroes – The Avengers - came together for the very first time and will feature a cover by one of the biggest names in the business, John Romita Jr.
The El Capitan Theatre will also offer guests a peek into the private collection of Stan Lee, legendary writer of Marvel Comics. This exclusive display includes rare comic books, including “Tales of Astonish”-the very first appearance of Iron Man, original helmets of Thor and Loki from the film production of “Thor”, a statue of the Iron Man suit from “Iron Man 2”, mini busts of Marvel characters from Bowen Designs, and an array of action figures Lee has acquired throughout his storied career.
Guests can also take their picture with the Tony Stark wax figure from Madame Tussauds Hollywood. A special ’Marvel’s The Avengers’ Breakfast will be offered for one night only open to ticket holders for either the midnight or the 4 am show on May 4th. Attendees will enjoy a ‘Marvel’s The Avengers’ themed breakfast complete with waffles and more! 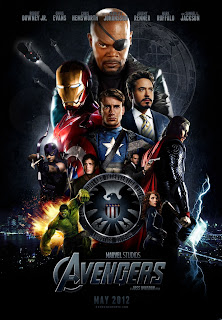 
Also starring Tom Hiddleston and Stellan Skarsgård, and directed by Joss Whedon, “Marvel’s The Avengers” is based on the ever-popular Marvel comic book series “The Avengers,” first published in 1963 and a comics institution ever since.


The film releases May 4, 2012, and is distributed by Walt Disney Studios Motion Pictures.