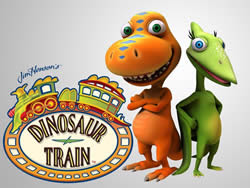 In DINOSAUR TRAIN, young viewers join Buddy, and his adoptive family of Pteranodons, on whimsical adventures through prehistoric jungles, swamps, volcanoes and oceans as they discover basic concepts in natural science, natural history and paleontology. The Dinosaur Train, a colorful locomotive, is customized to accommodate all kinds of dinosaurs, and has the ability to visit the Triassic, Jurassic and Cretaceous worlds, while the Train’s Conductor, a knowledgeable Troodon, provides passengers with fascinating facts along the way.

The one-hour special begins aboard the Dinosaur Train where Tiny gets the idea to gather all the dinosaurs in the “Dinosaurs A to Z” song for a picnic at Troodon Town. The conductor agrees, and as the Train starts picking up dinosaurs, Tiny, Buddy, Shiny and Don help keep track of how many of the different species have come on board. They learn about classification and organize the dinosaurs by their species, features, and size. When all 26 dinosaurs finally come on board, the Train has more extra cars than ever before and they need an additional engine to help pull it! Once they arrive at Troodon Town for the picnic, Tiny leads the 26 different “A to Z” dinosaurs in a fun, rousing, and historic singing of the “Dinosaurs A to Z” song!

But why wait until May 14th for all the Dinosaur A to Z fun? It’s never too early to practice the letters of the alphabet and learn about Buddy, Shiny, Tiny and Don’s ancestors and where they fall on the A to Z list. 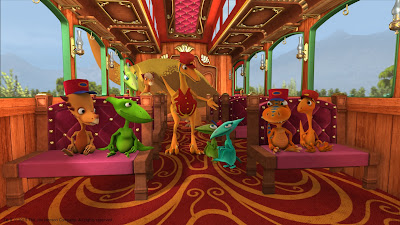 Here is the Contest part:

· Dinosaur Train collectable gifts
· Grand prizes of one-of-a-kind Dinosaur cartoon art created especially for your little one by Craig Bartlett, the artist and creator behind Dinosaur Train!
Posted by Unknown at 4:34 PM