Disney Interactive and Marvel invite fans to assemble an action-packed video using Marvel’s The Avengers Video and Music Remix on YouTube, an innovative video mixing tool that features official movie clips from “Marvel’s The Avengers,” the highly anticipated summer blockbuster set to premiere on May 4, 2012 and songs from Avengers Assemble, a compilation of music from and inspired by the film. Fans can access HD video clips from the movie; tools for trimming and rendering edits; special effects and transitions; and four songs from the Marvel Music/Hollywood Records’ Avengers Assemble album, including: Soundgarden’s “Live to Rise,” “Into the Blue” from Bush, “Shake the Ground” from Cherri Bomb (Hollywood Records) and Redlight King’s “Comeback” (Hollywood Records).

To create a Marvel’s The Avengers remix, fans can visit www.youtube.com/avengersremix and follow the instructions for choosing clips and songs and using the edit tools. Once the video has been published, fans can post and share their unique link anywhere they choose, as well as post their creations to the main gallery for others to enjoy and for the chance to see their video featured on a special Marvel channel on Disney’s new network on YouTube. 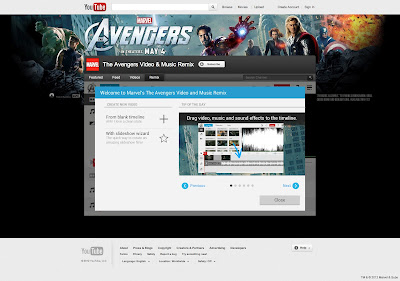 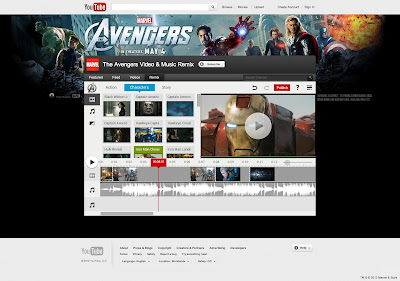