START A NEW HOLIDAY TRADITION
WITH THE FAMILY COMEDY HIT

FROM THE CREATORS OF DESPICABLE ME 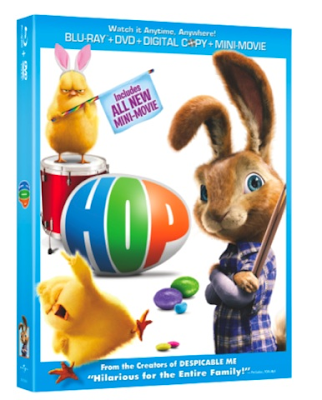 The perfect Easter gift, the HOP Blu-ray™/DVD Combo Packs deliver perfect hi-def picture andperfect hi-def sound and include an all-new, never-before-seen, music-filled mini-movie, extensive bonus features and interactive games, adding hours of entertaining fun for parents and children alike. The Combo Packs also contain a Digital Copy of the film for a limited time, compatible with iTunes?, iPad?, iPhone?, iPod™ touch, Android or online retail partners. Also included is an UltraViolet™ copy, the revolutionary new way for consumers to collect movies and TV shows by storing them in the cloud to instantly stream and download to computers, tablets and smart phones. Consumers can now truly enjoy their movies anytime, anywhere on the platform of their choice.

COMBO PACK EXCLUSIVE BONUS FEATURES:
•Phil’s Dance Party —An all-new mini-movie starring fan-favorite chicks Phil and Carlos. Phil eats so much candy that he crashes, leaving Carlos to perform a solo of the big dance finale…the Merengue!
•The World of HOP—Explore an interactive map of Easter Island to experience the making of HOP.
•All Access with Cody Simpson—The best-selling teenage heartthrob performs the film’s catchy theme song, “I Want Candy” and attends the HOP world premiere, his first Hollywood movie red carpet event.
•Russell Brand: Being the Bunny—A wacky look at what happens in Russell’s brain as he prepares to become THE Easter Bunny.
•Russell Brand’s Kid Crack Ups—Russell Brand interviews kids with comedic results.
•Carlos on Carlos: The Premiere According to Carlos—Experience the world premiere of HOP from the POV of Carlos. Viewers are given a guided tour of the party, where they can meet celebs and see all the fun!
•Emotion in Motion: The Dance of Ken Daurio—Writer Ken Daurio sits down to discuss his inspiration for everyone’s favorite dancing chick and reveals just how hard it was to teach Phil those awesome moves.
•Post Coup Commentary: Carlos & Phil Tell All—Actor Hank Azaria reveals the truth about Carlos’ and Phil’s relationship, and how they imagined Easter Island would be if their coup had been successful.

Games:
•E.B.’s Candy Challenge—The first one to the finish line in this virtual board game wins! There are some challenges along the way, including mini-games like Picture Challenge, 3 Egg Monte, and Candy Fix.
•Drum Along—E.B. can hit some tasty beats. Viewers compete to keep up with him as he plays a sequence of rhythms on four drums.
•Pink Beret Skill Tester—Fans can find out if they have what it takes to become a Pink Beret with the skill tester! Challenges will test memory, observations skills and logic as players earn the rank of Pink Beret, Carlos’ right hand chick, or Phil’s intern.

ADDITIONAL EXCLUSIVE COMBO PACK FEATURES:
•Digital Copy – Viewers can redeem a digital version of the full-length movie to watch on an array of electronic and portable devices.
•UltraViolet™: The revolutionary new way for consumers to collect movies and TV shows, store them in the cloud and stream instantly to computers, tablets and smart phones. Currently available in the United States only.
•U-Control: Universal’s exclusive feature that lets the viewer access bonus materials without leaving the movie!
•BD-LiveTM: Access the BD-Live™ Center through your Internet-connected player to watch the latest trailers and more.
•uHear™: Never miss another line of dialogue with this innovative feature that instantly skips back a few seconds on your Blu-ray™ disc and turns on the subtitles to highlight what you missed.
•pocket BLU™: The groundbreaking pocket BLU™ app uses iPhone?, iPod? touch, Android™, PC and Macintosh to work seamlessly with a network-connected Blu-ray™ player. Also available on the iPad™, owners can enjoy a new, enhanced edition of pocket BLU™made especially to take advantage of the tablet's larger screen and high resolution display. Consumers browse through a library of Blu-ray™ content and watch entertaining extras on-the-go in a way that's bigger and better than ever before. pocket BLU™ offers advanced features such as:

o Advanced Remote Control: A sleek, elegant new way to operate your Blu-ray™ player. Users can navigate through menus, playback and BD-Live™ functions with ease.
o Video Timeline: Users can easily bring up the video timeline, allowing them to instantly access any point in the film.
o Mobile-To-Go: Users can unlock a selection of bonus content with their Blu-ray™ discs to save to their device or to stream from anywhere there is a Wi-Fi network, enabling them to enjoy content on the go, anytime, anywhere.
o Browse Titles: Users will have access to a complete list of pocket BLU™-enabled titles available and coming to Blu-ray™ Hi-Def. They can view free previews and see what additional content is available to unlock on their device.
o Keyboard: Entering data is fast and easy with your device’s intuitive keyboard.
Posted by Unknown at 11:55 AM