Digging Up Adventure, The Buddies Find Themselves Treasure Hunting in Egypt!
All-New Movie Premiering On Blu-ray™ Combo Pack, DVD and Digital on January 31, 2012 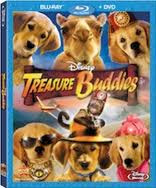 On January 31, 2012, The Walt Disney Studios proudly unleashes Treasure Buddies, an all-new live action feature for the whole family on Blu-ray™, DVD and Digital. The 6th film in the Buddies franchise stars everyone’s favorite talking canine superstars Rosebud, B-Dawg, Budderball, Buddha and Mudbud, as the pup pack journeys to mysterious Egypt in search of the greatest treasure known to animal kind, the legendary Cat’s Eye jewel, from the lost treasure of Cleocatra! Danger lurks around every secret sphinx, cryptic crypt and puzzling pyramid as Ubasti, a devious cat, schemes to possess the mystical jewel and use its powerful energy to rid the planet of all dogs! With help from new lovable friends Cammy, a baby camel - and a mischievous monkey named Babi - the gang and their new friends avoid booby traps, solve puzzles and explore a mysterious tomb in their most exciting and challenging adventure yet.


Bonus Features:
· DIGS: B-Dawg Edition – In this fun bonus feature, B-Dawg the hip hop happening pup gives a tour of his home to kid reporter G.
· “Roam” Music Video – A re-make of The B-52s song performed by Caroline Sunshine, Kenton Duty and Adam Irigoyen from the cast of the Disney Channel hit series “Shake it Up.”
Posted by Unknown at 4:57 PM