With Christmas quickly approaching, I wanted to take this opportunity to share with you some of my favorite video games for this Holiday Season. It's no surprise that this will definitely be a gamer's Christmas. There are so many new titles available now and, in no particular order, here is my list of all the MUST HAVE video games that I'm sure your little Gamer is wishing for right now! (I've also included a few titles for the BIGger Gamer in your home!)

Kinectimals Now with Bears for Kinect by Microsoft retails for $49.99
*Joining the original feline cubs, now play with cuddly bear cubs as you solve a new mystery on an undiscovered island! Share exciting adventures and fun challenges as you teach your best friends new tricks using your voice and body to interact naturally with them.

Disney Universe by Disney Interactive retails for $49.99
*Disney Universe is an off-the-wall non-stop action adventure where Disney worlds and characters mix up for the first time. Suit up in iconic costumes and face challenges in legendary Disney worlds. Defeat enemies, collect coins, unlock new costumes & explore with friends as you battle in a mix-up of worlds inspired by numerous Disney and Pixar films.

Cars 2 by Disney Interactive retails for $39.99
*Inspired by the DisneyPixar animated film, Cars 2: The Video Game lets players jump into the Cars 2 universe with some of their favorite Cars personalities in exotic locations around the globe. Players can choose to play as Mater & Lightning McQueen, as well as some brand new characters.

The Sims 3 Pets by Electronic Arts retails for $49.99
*Create pets, from loyal dogs to daring kitties and determine their looks and personality traits. Then embark on adventures with your Sims and their pets, like uncovering relics and solving mysteries. With control of your pets, you can enjoy whole new ways to enrich or mess with your Sims' lives!

Family Game Night 4 The Game Show by Electronic Arts retails for $39.99
*Experience the fun and excitement of the popular TV show right in your own living room! This time you're playing with larger-than-life pieces in re-imagined versions of your favorite Hasbro games.

Monopoly Collection by Electronic Arts retails for $39.99
*Hasbro's #1 family game is back with 2 games for the price of 1. Build your real estate empire in Classic Monopoly or watch the streets evolve and come alive in Monopoly Streets.

Trivial Pursuit: Bet You Know It by Electronic Arts retails for $39.99
*Showcase your knowledge with more than 7,000 fascinating questions based on today's current events, pop culture and more. 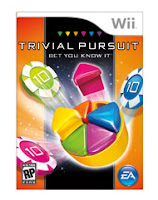 Sesame Street: Once Upon a Monster for Kinect by Warner Bros. Interactive retails for $49.99
*Join your favorite Sesame Street characters and friendly new monsters on a journey filled with discovery, learning, and fun! Each chapter is full of life lessons, including friendship, sharing and conquering fears. 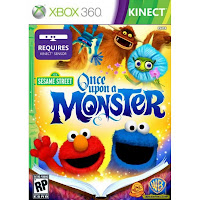 I have no doubt your gamers will enjoy all of these titles just as much as mine! Happy Shopping and Happy Holidays!
Posted by Unknown at 5:38 PM