Disney On Ice is coming to So Cal! 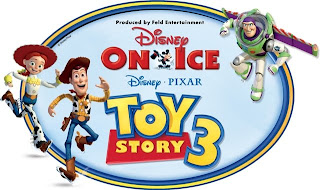 The Toys are Back in Town! DISNEY ON ICE presents
DISNEY• PIXAR’S TOY STORY 3
Coming to the Southland

Toy Story 3, the Academy Award®-winning smash hit blockbuster, is so hot it’s cool as everyone’s favorite toys take to the ice in Disney On Ice presents Disney•Pixar’s Toy Story 3! An accomplished creative team and a cast of world-class skaters are bringing Woody, the pull-string cowboy; space ranger Buzz Lightyear; Jessie, the yodeling cowgirl; and the rest of the Toy Story gang to fans and families around the country in this all-new, high-energy ice spectacular.
Inspired by the #1 animated movie of all time, Toy Story 3, and memorable moments from Toy Story and Toy Story 2, everyone’s favorite characters are hitting the ice in this sensational live production coming to the Southland! Catch all the heroic action when Buzz Lightyear, Woody, Jessie and the Toy Story gang escape from the rambunctious tots of Sunnyside Daycare and race for home, in their most daring adventure ever. Plus a few new faces join the fun, including Barbie’s groovy bachelor Ken and Lots-o’-Huggin’ Bear. It’s the biggest Toy Story experience ever on ice, jam-packed with fast-paced adventure such as Buzz’s galactic battle with Emperor Zurg and a hoe-down on the set of “Woody’s Roundup.” Relive the humor, friendship and charm of Toy Story when Disney On Ice presents Disney•Pixar’s Toy Story 3 takes family fun to infinity and beyond!