Cars 2 and Winnie the Pooh are back! 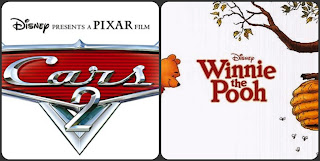 The Walt Disney Studios proudly announced today that the El Capitan Theatre in Hollywood will host a limited return engagement of two of this year’s most popular animated feature films, “Cars 2” (in Disney 3D) and “Winnie the Pooh.”

As a special bonus before each screening of “Winnie the Pooh,” Winnie the Pooh himself will appear live on stage! In addition, The El Capitan Theatre will exhibit pieces of extraordinary art that went into the making of these films. There will also be a special “Winnie the Pooh” breakfast at 9:15 on Saturdays and Sundays.

For tickets and showtime information please visit http://www.elcapitantickets.com.com.
Posted by Unknown at 10:31 AM