Phineas and Ferb the Movie on DVD! 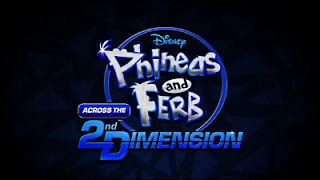 PHINEAS AND FERB THE MOVIE: ACROSS THE 2nd DIMENSION

This “Ultimate Fan Pack” Includes A DVD + Digital Copy Of The Movie,
Eight Digital Music Tracks, A Do-It-Yourself Platypult Kit & Much, Much More!

Families can bring home Disney Channel’s original movie, Phineas and Ferb The Movie: Across The 2nd Dimension, in the 2-Disc “Ultimate Fan Pack” DVD Set on August 23, 2011. Based on Disney Channel’s #1 animated hit comedy series among Tweens 9-14 for three years running, this epic release comes packaged with a DVD of the movie, a digital copy of the movie with eight digital music tracks, all new bonus features and an awesome do-it-yourself Platypult Kit.

This special 2-Disc “Ultimate Fan Pack” also includes a variety of cool bonus features (i.e., eight deleted scenes, a music video, an exclusive song, a sing-along “Perry-oke” feature, and a bonus episode). The Digital Copy lets viewers transfer the movie and the eight digital music tracks onto their laptop and/or portable devices of choice – to watch the movie or listen to songs anytime, anywhere and at the touch of a button. The Ultimate Fan Pack is the perfectgift for teens and/or families on-the-go! 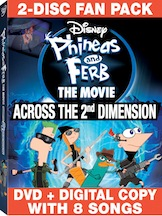 Phineas and Ferb The Movie: Across The 2nd Dimension features Disney Channel's dynamic animated duo, Phineas Flynn and his stepbrother Ferb Fletcher, as they go on their biggest adventure yet. When the boys discoverthat their pet platypus Perry is in fact a secret agent who battles the forces of evil daily, they join him on a grand adventure that blasts them to another dimension where a truly evil Dr. Doofenshmirtz has taken over an alternate Tri-state Area. This larger than life, action-packed adventure will have the entire family laughing out loud!
Posted by Unknown at 5:01 PM