A Cruisin' Good Time at RIDEMAKERZ!

With the release of CARS 2 just around the corner, we headed over to RIDEMAKERZ in Downtown Disney for our very first time to hang out with some of our favorite four-wheeled friends! RIDEMAKERZ gives kids and adults of all ages the opportunity to customize a RIDE from start to finish. Led by ZEO, Larry Andreini, the belief behind RIDEMAKERZ is that "No two RIDEZ are alike!". Children can use their imaginations and creativity to build something truly unique...personal...a work of ART! 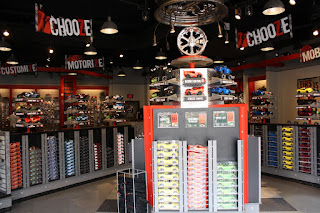 My son, Jackson, couldn't believe the selection of characters they had from the Disney/Pixar movie CARS. He had a difficult time choosing which Lightning McQueen he wanted to build, but luckily RIDEMAKERZ Crew Member, Matt, was a big help and made the selection process easy. He helped my family select the body, wheels & rims for each of our RIDEZ.

Now it was time to add the engines! Crew Member, Carlos, took the driver seat and hooked up all the RIDEZ with R/C capability and turned Jackson & Mya's cars into Monster CARS! We had a blast putting all the pieces together and bringing our CARS to life. Even Parker had fun making his Tow Mater!

The final stage is to "Trick Out" your RIDEZ with special decals, grills, spoilers, roof racks and so much more. Our friend Britney spent a lot of time with the kids helping them get their RIDEZ exactly the way they wanted them. Mya wanted a heart shaped grill for her Sally and Jackson wanted Dinoco decals and a spoiler for his Lightning McQueen.

Jackson has already made it clear to his Dad and me that his 7th Birthday will be here at RIDEMAKERZ! The Birthday Bash is nothing short of FANTASTIC! 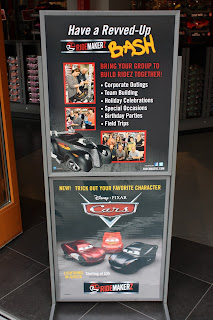 We had an amazing time at RIDEMAKERZ and met some really great folks. I have to send a BIG THANK YOU to Heather, Melissa, Brenda, Britney, Lisa & Jessica for always showing me a great time. And Thank You to Larry Andreini for sharing such an amazing success story with us. You are truly blessed! We love you all!!!