PBS KIDS GO!'s iconic kids series ARTHUR continues its 14th season with five brand-new episodes highlighting environmental protection, cultural awareness, and teamwork beginning on Earth Day, Friday April 22, 2011, and continuing through Thursday April 28, 2011 (check local listings). The fun starts with a special Earth Day message from Arthur and his friends in Buster Baxter and the Letter from the Sea. In this episode, Buster discovers a message in a bottle on the beach while on vacation with the Read family. Could it be an urgent message from the people of the Lost City of Atlantis? Buster is determined to find out and sends messages back...by throwing his own bottles into the ocean. Join Buster and Arthur as they learn that keeping our beaches and waterways clean is the real message.

Online, kids are invited to take the Go Green Challenge (http://pbskids.org/arthur/thetreehouse/gogreen/index.html) on the ARTHUR website. In this special section, kids can join their favorite ARTHUR characters in support of a green cause. Whether it's making better food choices with Buster, or saving energy with D.W., kids have opportunities to take simple green steps that can help save the environment. Also, kids will be able to print out a "Challenge Page" to keep track of their green actions.

Throughout the week of new episodes, Arthur and friends will follow a soccer ball as it makes its way around the world. In Follow the Bouncing Ball, airing Friday, April 22, 2011, Alberto Molina's beloved soccer ball, signed by his favorite Ecuadorian soccer star, "El Boomerang," is lost. Kids are invited to join Arthur in learning about new cultures and track all the places "El Boomerang" goes as it travels around the world (and into outer space!). In a special episode airing Thursday, April 28, 2011, kids learn that teamwork can help their dreams soar when NASA Astronaut Mike Finke guest-stars on ARTHUR in Buster Spaces Out. Inspired by footage of the moon landing, Buster wants to go to outer space. Well, someday. For now, it would be really cool to build and launch a rocket. So Buster enlists his friends to help...but they can't agree on anything and the mission stalls. Luckily, their new friend Astronaut Mike teaches them that only teamwork will accomplish this mission--and then it's blast-off! Tune in for these adventures and more as your favorite ARTHUR characters travel the globe in Around the World in 11 Minutes, start competing blogs in Muffy and the Big Bad Blog, try their hand at fashion design in All the Rage, cope with teasing in D.W., Queen of the Comeback, explore Africa in In My Africa, and discover knitting in Arthur Unravels. The full schedule of air dates is below (check local listings): 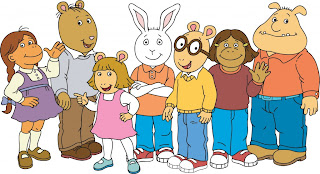 For more info on ARTHUR and more amazing shows visit PBSkids.org.
Posted by Unknown at 7:31 PM