March 23, 2010 – On April 19, 2011, Walt Disney Studios Home Entertainment
will be proudly unveiling Sharpay’s Fabulous Adventure, an all-new movie on Blu-ray™ and DVD starring Ashley Tisdale reprising her role as Disney Channel’s global sensation “High School Musical” drama queen character Sharpay Evans. A full three minute sneak peek of the movie is now widely available for fans of all ages to get a glimpse of this hilarious fish out water tale about a small town Diva and her dog’s adventures in New York City at Youtube.com/disneymovies. 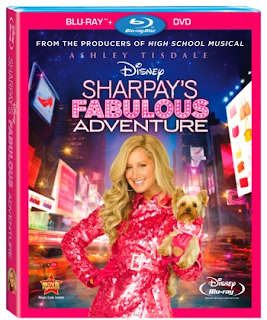 Additionally, a brand new Sharpay’s Fabulous Adventure facebook page
(www.facebook.com/DisneySharpay) and Twitter handle (@DisneySharpay) have also launched so that fans can join and stay on-top of all the latest news, sneak peeks and messages from key cast members.

From the original producers of High School Musical and the director of The Tooth Fairy, Sharpay’s Fabulous Adventure is a witty comedy about pursuing your life-long dreams and believing in yourself. The films catchy tunes, Sharpay’s lavishly glittery “pink” outfits, and the adorable featured male co-stars - Austin Butler ("Life Unexpected," "Ruby and the Rockits" and “Zoey 101”) and Bradley Steven Perry ("Good Luck Charlie") - will be sure to keep viewers fully entertained and laughing throughout.