The Pumpkin King is coming to the El Capitan! 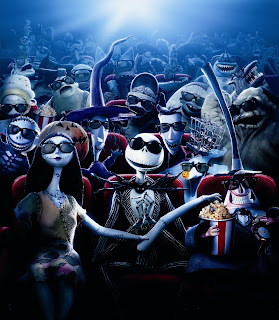 Tim Burton’s “The Nightmare Before Christmas” makes its highly anticipated annual return to its favorite haunt – Hollywood’s legendary El Capitan Theatre –for a special engagement from October 21 through October 31, and for the first time ever, in 4-D, it was announced today by Lylle Breier, senior vice president of worldwide special events for Walt Disney Studios Motion Pictures

The Opening Night festivities will be hosted by Disney producer Don Hahn ("Beauty and the Beast," "The Lion King," "Who Framed Roger Rabbit"), and there will be special ghoulish frights and delights for opening night guests as well.

Tickets can be purchased at the El Capitan box office (6838 Hollywood Blvd.), online at http://www.elcapitantickets.com/
Posted by Unknown at 1:31 PM